MCQ (Single Correct Answer)
If the lattice constant of this semiconductor is decreased, then which of the following is correct?

A crystal structure is composed of a unit cell, a set of atoms arranged in a particular way; which is periodically repeated in three dimensions on a lattice. The spacing between unit cells in various directions is called its lattice parameters or constants. Increasing these lattice constants will increase or widen the band-gap $$\left( {Eg} \right)$$, which means more energy would be required by electrons to reach the conduction band from the valence band. automatically $${E_c}$$ and $${E_v}$$ decreases.
3

MCQ (Single Correct Answer)
In the following, which one of the diodes is reverse biased?
A MCQ (Single Correct Answer)
The circuit has two oppositively connected ideal diodes in parallel. What is the current following in the circuit? 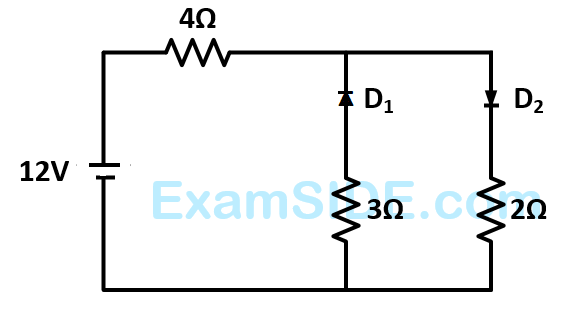 So effective resistance of the circuit