MCQ (More than One Correct Answer)
With respect to the compounds I-V, choose the correct statement(s).

Triphenylmethane (I) is acidic because its conjugate base is stabilised by resonance.

Cyclopentadiene (IV) is acidic because its conjugate base is aromatic.

Nitrobenzene is more acidic than benzene because nitro group is electron withdrawing. It will stabilise the conjugate base of benzene by $$-$$R and $$-$$I effect.

The acidic strength order on the basis of pKa data is

MCQ (More than One Correct Answer)
Consider the following four compounds, I, II, III, and IV.

Choose the correct statement(s)
A
The order of basicity is II > I > III > IV.
B
The magnitude of pKb difference between I and II is more than that between III and IV.
C
Resonance effect is more in III than in IV.
D
Steric effect makes compound IV more basic than III.

The correct basic strength order is

(IV) is strongest base due to steric inhibition to resonance effect.

(III) is weakest base due to $$-$$M group of three nitro groups present at ortho and para positions.

(II) is stronger than (I) since (III) is tertiary and (I) primary aromatic amine.

So, option (a) is incorrect.

MCQ (More than One Correct Answer)
For the following compounds, the correct statement(s) with respect to nucleophilic substitution reaction is (are) (a) I is a benzylic halide, thus, it undergoes SN1 reaction easily as benzylic carbocation is resonance stabilized. III also follows SN1 mechanism as it is 3$$^\circ$$ alkyl halide.

(b) Compounds I and II are 1$$^\circ$$ alkyl halides, then they undergo SN2 mechanism. 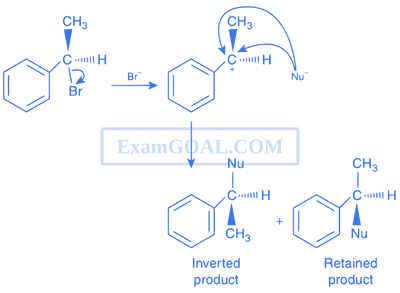