Voltage gain of the amplifier is

The figure shows a logic circuit with two inputs A and B and the output C. The voltage wave forms across A, B and C are as given. The logic circuit gate is
A
OR gate
B
NOR gate
C
AND gate
D
NAND gate

The truth table is 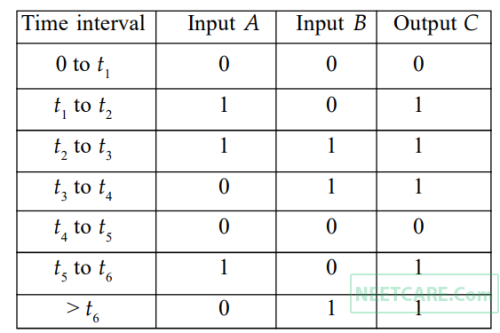 The logic circuit is OR gate.
3
MCQ (Single Correct Answer)

Transfer characteristics [output voltage (V0) vs input voltage (Vi)] for a base biased transistor in CE configuration is as shown in the figure. For using transistor as a switch, it is used In the given graph,

Using transistor as a switch it is used in cutoff region or saturation region.

Using transistor as a amplifier it is used in active region.
4
MCQ (Single Correct Answer)

The electronic configuration of 14Si

As they are away from Nucleus, so effect of nucleus is low for Si even for Sn and Pb are almost mettalic.